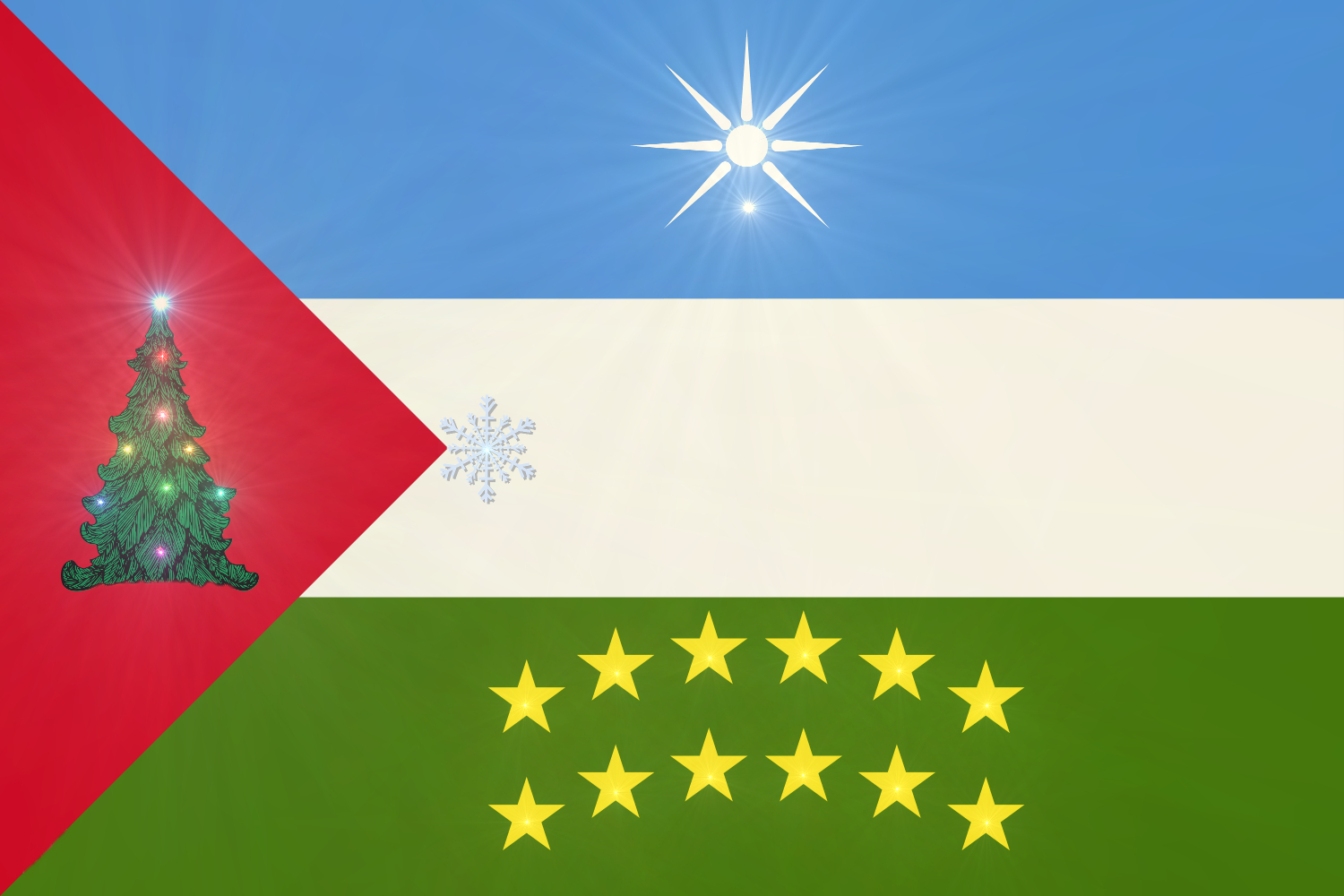 The official flag of the supernatural sovereign city-state of North Pole City is pictured above. It is displayed and flown proudly around Santa’s winter wonderland in a number of locations. Below is an explanation of each flag characteristic based on the colored background sections:

🔵Blue is for the sky despite it being dark half the year. Although there is plenty of star and aurora light. The white circle is the Christmas Star which is the only star that actually physically exists in our skies and can only be seen within North Pole City. It’s the original Star Of Bethlehem that moved through the skies to lead Saint Nicholas to the future Christmas Capital. The star itself radiates the light of God and his Son Jesus Christ directly from Heaven thus making the North Pole the holiest place on the planet. The Seven large rays of the star are for the Seven Archangel Princes Of Heaven. The multitude of subtle rays are for all the Angels showering the sainted city in holy light. The smaller star below that is the North Star Polaris that lies directly overhead at the North Pole.

⚪️White is for the snow and ice of the North Pole. The snowflake more directly symbolizes that and is primarily featured for the Winter God Jack Frost since he aided Santa in charting and building North Pole City. The celebration of the Yule Winter Solstice is where the Christmas Season began even before the birth of the Demigod Christ.

🟢Green is for the land even if most of it is covered in snow. It also symbolizes all the evergreens located in the city. Despite the North Pole being a floating ice mass on the Arctic Ocean, there is soil, grass, and other plants on top of that within the winter wonderland. The 12 stars are for the Twelve Districts of North Pole City:

🔴The Red Triangle stands for the Spirit Of Christmas intertwined with Santa Claus and the red suit he adorns most of the time. The Christmas Tree also symbolizes the Spirit along with the 8 lights standing for the eight original Elves. They joined Santa on his eternal journey even before North Pole City existed. The colors are for the rainbow of lucky Leprechauns who are related to his enchanted elves. Also, the little lucky Irishmen provide North Pole currency. The colors are also for the mesmerizing light of the Aurora Borealis. The white star at the top with a subtle blue border is for Saint Nicholas. All the subtle rays are spreading forth the Christmas Spirit to everyone.

The colors red and green are associated with Christmas due to ancient celebrations of the Winter Solstice thousands of years ago. It was thought that Mother Nature wanted the Earth to remain beautiful with greenery through the desolation of winter. So she gave us evergreens and holly that included crimson color. Holly was hung in decoration even before Christmas existed. It was considered to provide good luck and protection through the harsh winter.🎅