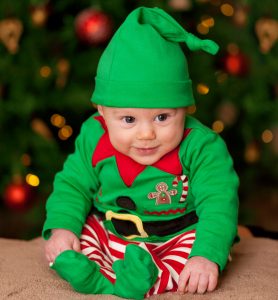 In general Elves were created by the Gods and Goddesses of Mother Nature. They were physical paranormal creatures meant to be happy helpers of various deities including Fairies. They were made of diminutive stature in order to aid in hiding from humankind when necessary. As their numbers grew some Elfin groups went off to pursue their unique interests and hone specific talents. Those who became Santa’s Elves were those who enjoyed repairing and making things for humans. Toys in particular.

There were originally 100 Elves that would travel about Europe and far west Asia gifting toys to kids in the middle of the night. They derived joy in making children happy. It was fate when they happened across Santa Claus several centuries ago. They immediately came under the spell of Saint Nicholas’s Angelic aura and volunteered to join him on his epic journey! A merciful mission of spreading peace and good cheer upon the Earth.  Santa personally blessed and enchanted his Elves holy and immortal. Santa’s Elves are more powerful than any other type of Elf on the planet. This is because they have a direct metaphysical line to the Spirit Of Christmas and the powers of the Demi-Angel Claus.

All of Santa’s little Elves have the last name Elf unless otherwise stated. In addition Elves have no gender, and usually appear androgynous. However some may look more male or female. Either way they’re the cutest beings you’ve ever seen!  As of 2018 there are now 221 Enchanted Elves who aid Santa in his Christmas quest at North Pole City and around the world on various missions. Seven new Elves are born every century via a secret mystical process. Below is an impartial list in progress:

Special Humans who have the Spirit Of Christmas dwelling deep in their hearts may become Elves in every way except appearance. Usually Santa Claus chooses them for a unique mission in life and anoints them in his Angelic light. The original Elves themselves welcome them as kindred spirits as they radiate forth Elfin energies to supercharge the Human Elf’s soul!

If you feel you’re an Elf waiting to be discovered then post below and wait to see if your name appears on our list!

More To Be Listed Later…