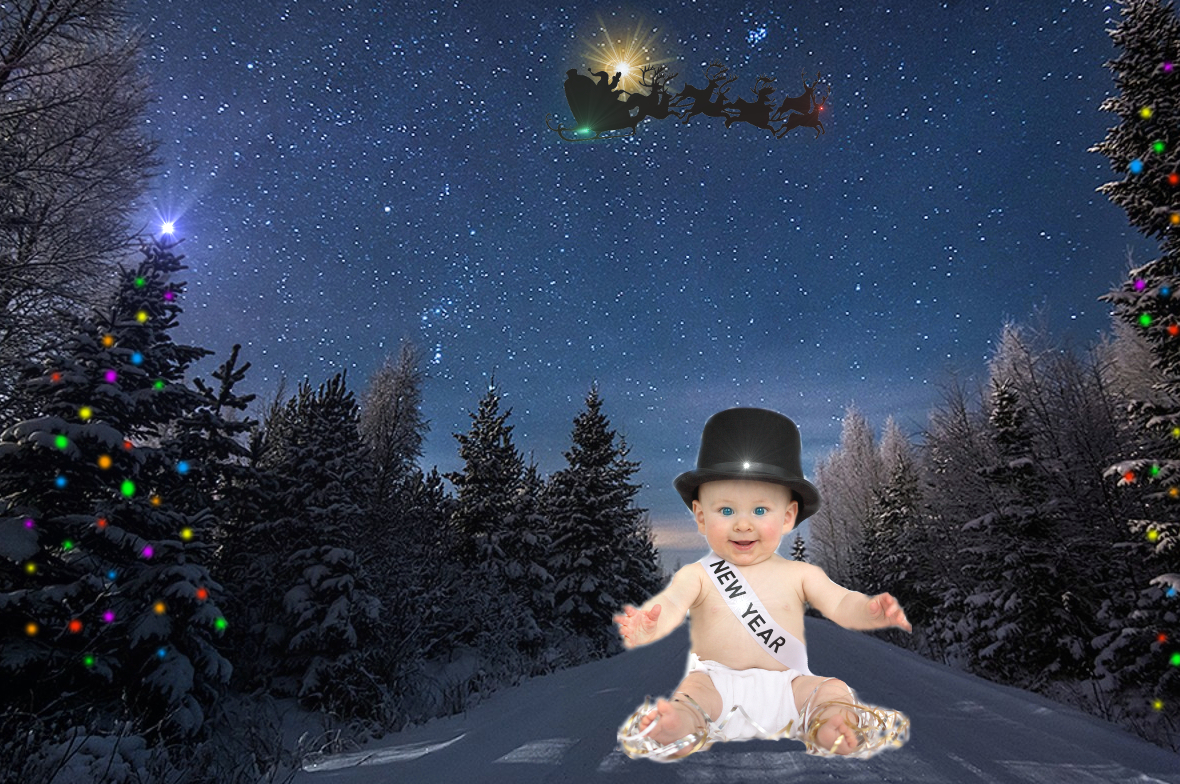 What Does Santa Claus Do On New Year’s Day?

The Christmas Season continues with New Year’s Day! After various late-night New Year’s Eve parties around North Pole City, the delightful day didn’t get started until many awoke at 10 AM to find a gift under their Christmas trees. These are the New Year’s gifts delivered by Elves on New Year’s Eve amid the fun festivities. The gifts are handmade by the Elves up to a year in advance to be distributed on New Year’s Day in the spirit of renewal and hope. At 11 AM brunch is served at Claus Manor for everyone! It’s tradition for all within the sainted city to cross the Claus Family threshold for righteous luck. Naturally, Santa’s house isn’t big enough to accommodate everyone so he utilizes angelic geometric magic to temporarily make his home four-dimensional. Much like his 4-D gift bag that holds millions of presents for Christmas Eve delivery. The Claus dining room appeared to extend to infinity until everyone had their fill of food and left. At Noon Santa Claus gave an inspirational speech about starting the year anew and holding strong to your New Year’s resolutions.

Afterward, everyone wrote down their resolutions or wishes for 2023 and cast them with good intentions into the Wishing Well. The good luck well was built by Leprechauns hundreds of years ago and the water within actually connects to Ireland via a paranormal portal. Waiting at the well were several visiting Leprechauns who passed out light luck charms to bring about fantastic fortune throughout the year. Next came the annual Polar Bear Plunge into the ice-cold North Pole Port. This included Santa Claus and his elves. Not to mention the actual polar bears swimming among penguins in peace.

The Arrival Of The Baby New Year

At 3:00 PM Father Time, the Baby New Year of 2022, performs the annual ceremonial ritual of presenting the latest Baby New Year to Santa Claus at St. Nickolaus’s Holy Church Of The Northern Light. On January 1, 2023, Santa, in his capacity as Saint Nicholas, blessed the child of renewed hope holy. A holy child that is literally an Angel from Heaven who volunteers to grow up on Earth for one year! Santa lovingly held the Baby New Year 2023 in his muscular arms as his wife, Holly Claus, looked on with merry warmth in her sparkling eyes. She also gently snuggled the angelic child and fed him a warm bottle of consecrated Unicorn milk. Santa’s children, Nick, Jr., and Mary were present as well to witness the baby that is the very embodiment of humankind’s hopes and dreams for 2023.  All in attendance took turns holding the cuddly little ball of joy. All while Father Time & Father Christmas discussed various matters related to our paranormal planet. Amid the activity, the world’s few immortal dogs, a Dalmatian named Sparky, frolicked about Claus Manor with tail-wagging glee.🐶 Read The Rest Of The Sensational Story About What Happens On New Year’s Day At North Pole City Here…