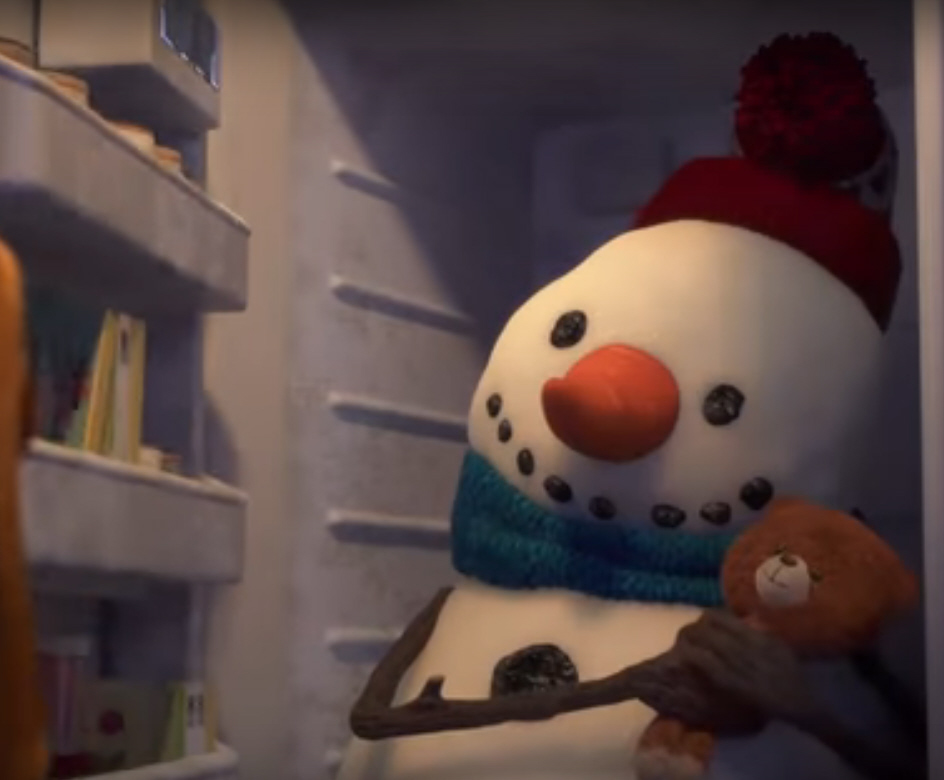 A special girl named Olivia with the Spirit Of Christmas strongly dwelling within her heart manages to breathe life into a snowman she built! Somewhat similar to the legendary Frosty The Snowman. The snowman is directly linked to her imagination and soul. He only animates when nobody else is present. As he is a direct product of her imagination, he can create magical shadow movies with his hands through light projected behind him. She grows up with him every winter while he lies dormant in the large garage freezer for the rest of the year. She opens the door every so often to spend time with the icy fellow. Thankfully, such a being born of the Christmas Spirit can astrally project themselves to North Pole City and interact with people there. Although any physical manifestation would be limited. Still, don’t feel bad for all that time he sits in the freezer. In his mind, he is happy and free! Luckily, there has never been a power outage long enough to endanger the snowy fella! Not to mention the freezer miraculously never broke in decades!☃️

Unfortunately, the Snowman didn’t have the ability to communicate where Santa’s North Pole City is or even how to get there. Although even if he did, he knew there was a grander purpose at work and it wasn’t yet time to reveal these details. As the girl grows into a woman, she gradually loses complete memory of him with the loss of childhood innocence. This is despite opening the freezer to get food out and seemingly not seeing him. It’s almost as if he’s become invisible. Olivia seems to forget about the poor snowman until she rekindles that childhood magic through her own child named Julia. This after a chance mishap lights up her snow globe creating a shadow image on the wall like her snowman used to do. Once again, she lives the Christmas winter wonderland dream with her animated Snowman. However, now she shares the magic with her daughter who will undoubtedly pass it on to her kids and each successive generation.🎄

It seems all of this was a test to see if Olivia was worthy to enter the magical world of the supernatural. An adult with untapped paranormal power potential who truly believes in Santa and The Christmas Spirit is rare. Once she reconnected with her childhood imagination and her snowman creation Santa Claus and Frosty The Snowman paid her a surprise visit. She was invited to live and learn how to develop her supernatural abilities to aid in fighting the forces of darkness and help humanity wherever she can. Olivia quit her 9-5 office job and moved to Santa’s sainted city with her daughter and the snowman. Upon entering North Pole City, the snowman became Sylvester The Snowman. A sentient being capable of intelligent speech. The Snowman has begun growing his own soul from that of Olivia and her child Julia. Before entry, he could only move his wooden stick arms and hands along with blinking his eyes and altering his smile. Now he can slide about under his own power. Also, the Teddy Bear that kept him company in the freezer for years came to life as all toys do at North Pole City. Sylvester became best friends with Frosty and everyone lived happily ever after for all eternity as enchanted immortals!🎅